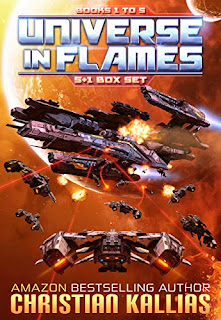 A terrifying force has risen from the ashes. Something ancient, powerful, and malevolent. It lurks in the shadows, assembling its forces, and getting ready to set the universe in flames.

This Box Set contains the first 5 books of the Universe in Flames saga (+ a bonus novella) at a competitive price point & with new cover.When the Star Alliance is attacked, ace pilot Lieutenant Chase Athanatos and his friends attempt to survive the total annihilation of their kind. Their struggle for survival brings them to a world far far away, a little planet called Earth. Little do they know that in doing so, they’ll expose humanity to the biggest scourge the universe has ever faced.Nothing is ever as it seems in this thrilling, action-packed Science Fiction Space Opera series. Greek mythology and fantasy elements add a dab of mysticism and originality to the intense and suspenseful adventures of Chase: a man unaware of his past, a man who must learn to get a grasp with what destiny and the Gods of Olympus have in store for him.Unwilling to let evil unleash their minions upon every soul in the universe and armed with his courage, convictions, as well as the help of the gods themselves, Chase fights not only for his own survival but for everyone's, on Earth and throughout the galaxy. 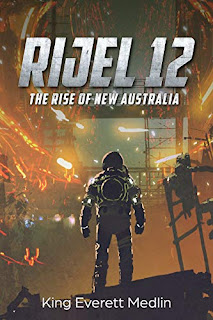 The remote Intergalactic Penal Colony on the planet Rijel 12 is a very profitable enterprise. Its desolate surface is an uninhabitable wasteland relentlessly scorched by its sun, but inside the planet is a vast treasure trove of the most precious resources in the galaxy.
Prisoners sentenced to Rijel 12 know it’s a one-way ticket. It used to be a convict would serve their time and come home. That stopped a while ago. Inmates are forced to work the mines in wretched conditions and the death rate is staggering. Luckily for the warden, new inmates arrive monthly to replenish the labor pool. Business has never been better.
From the darkness of their miserable existence, one prisoner decides to take a stand and begins to organize a resistance. Inmates rally to the cause and prepare for rebellion. Can the rag-tag rebels of ‘New Australia’ succeed in their quest for freedom or will the warden and the overpowering might of the Interplanetary Authority extinguish their only hope? 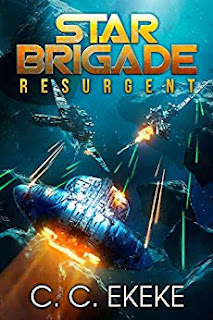 A war-weary captain. A ruthless alien uprising. Can he reassemble his team to save the Union?Captain Habraum Nwosu is haunted daily by the loss of his combat unit. Determined to be a role model for his motherless son while on sabbatical, he resists the embattled Star Brigade’s pleas for him to return. Conflicted by the impossible choice, a vicious attack puts his dwindling family in the cross-hairs…Driven to restore order amidst terrorism, Nwosu fears his new handpicked Star Brigade will suffer the same fate as his previous crew. Can he resurrect his team and protect his son or will his fear of failure fulfill a lethal prophecy?