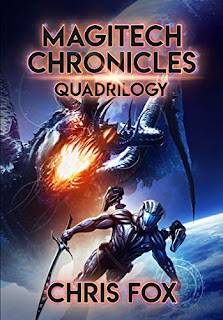 Aran awakens in chains with no memory. He’s conscripted into the Confederate Marines as a Tech Mage, given a spellrifle, then hurled into the war with the draconic Krox and their Void Wyrm masters.Desperate to escape, Aran struggles to master his abilities while surviving the Krox onslaught. Fighting alongside him are a Major who will do anything to win, a Captain who will stop at nothing to see him dead, and a woman whose past is as blank as his own. Caught between survival and loyalty Aran must choose. If he flees he will live, but the Krox will burn the galaxy. Stopping them requires a price Aran may be unable to pay:Learning to trust the very people who enslaved him.