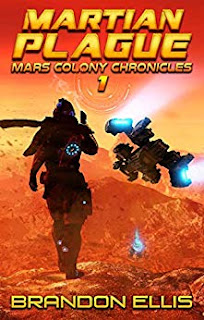 We expected Mars to be an escape, not a trap.A crimson, blasted, frigid trap. Maybe humans were lucky to leave Earth as cowards...or maybe they should have died trying to save it from the aliens. Because what's now arrived on this red rock may be worse than death.Aliens destroyed humanity and seized Earth. Now they have sent a terrible, unstoppable disease to the last human outposts on Mars.The doomsday clock is ticking and only criminal archaeologist Ozzy Mack can decipher the clues buried in the ancient Martian ruins...clues to the cure and the salvation of humankind.Unless it's already too late.