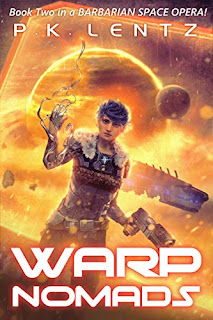 Boldly going where no barbarian has gone before!

The Dawn has left Earth far behind on a mission through hyperspace to attack a Warp Tether, a cosmic lighthouse which bends space to shorten interstellar travel times. Destroying it would put Earth out of the Jir Pentarchy's reach for years. It would also keep the Dawn from returning home, something many among them are eager to do. Even if it means mutiny.


A powerful improvement to Arixa's alien weapon, the ironglove, makes her deadlier than ever, but if she's forced to use it to keep control of her own war band, then her crusade against the Jir may be over before it begins. Instead of becoming a valuable source of recruits for a rebel horde, the 80,000 humans and aliens asleep in the holds of the Sagaris will die, or worse.
The Jir are not idle in the face of Arixa's threats. A fallen admiral commanding just five destroyers has been assigned to defend the Warp Tether. But his ambitious number two seems to have a more aggressive strategy in mind for catching the upstart Lessers.
The second battle of human vs. Jir will be fought with weapons ranging from arrows to warp-enabled warships, on foot among alien trees and in the majestic rings of a gas giant. Join Arixa and the Dawn as they take one giant leap from the steppe to the stars and become... WARP NOMADS.