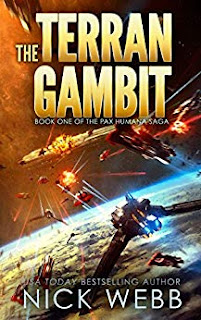 The Terran Gambit by Nick Webb

Lieutenant Jacob Mercer likes fast motorcycles, faster women, and screamin' space fighters. As a reckless fighter jock in the Resistance fleet battling the Corsican Empire, he lives solely for the thrill of taking out as many Imperial bogeys as he can.
A rebel victory is looming on the horizon when the Imperials abruptly change tactics and, in a devastating show of force, incinerate the city of Dallas with a thermonuclear blast – killing millions – and delivering a merciless example of what happens to upstart worlds in the Pax Humana.
But the Resistance will not be cowed so easily. In retaliation the rebel leadership devises a daring plan to strike at the Empire's heart in a final, desperate bid for freedom, a plan that will put Jake Mercer in the captain's chair of the most advanced warship in the galaxy.
To succeed, all Jake has to do is face down a psychopathic Imperial Admiral bent on utterly destroying the Resistance and even Earth itself.