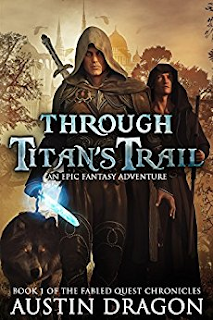 Many die along the Trail, but to embark on such a magical adventure and behold its ultimate treasures, all shall be gladly risked. !

Every three years it arrives—The Kings’ Caravan to the legendary city of Atlantea. From the far reaches of the Seven Empires of Pan-Earth, men travel from Avalonia—the sole gateway into the realm of the Magical Lands for the year-long journey along a path created by the ancient Titans themselves.
It is a journey like no other through unimaginable dangers, both mortal and magical, of men and monsters, by day and night—all to reach the limitless riches of the magic kingdom of Atlantea. Only under the protection of the Four Kings—the Kings’ Caravan—is such a journey possible. Or is it?
A new alliance forms under the stranger known as Traveler as the most fantastic and deadliest adventure of all time, this fable quest, Through Titan’s Trail begins!