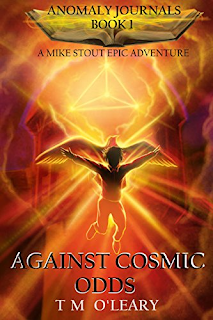 Against Cosmic Odds by TM O'Leary

Imagine if you could fly like a bird, Mike Stout can. But he's prey to the alien who made him an orphan.
Can another alien, a rebel, keep him alive to save the world?
Following a blast that killed his family, eleven year old Mike wakes up alone, orphaned. He finds temporary shelter with his friend Charlie's family, but his presence jeopardizes Charlie.
Adopted by a rebel from the killer's planet, she takes Mike to her underground base and tells him why his family was targeted. Now on the assassin's hit list, he learns alien ways, even how to merge with birds and fly. But when he and Charlie help a runaway, Hannah and her friend Aurelia, they find themselves in a race to survive. Can they outrun Mike's alien pursuer and his ally, a corrupt sheriff?