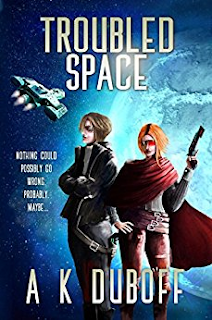 Nothing could possibly go wrong. Probably. Maybe...
Aspiring smuggler Jack Tressler is used to taking misfortune in stride. When he’s subscripted into a pirate gang, getting an ill-fitting cybernetic eye and his losing dignity are the least of his worries.
Jack soon finds himself roped into a crazy heist of a prototype energy core as recompense for a crime he didn’t commit, and the job is anything but straightforward. To get the core, Jack's team must break into a secure research facility, but they aren't the only group after the groundbreaking device.
With rabid pirates, ruthless corporations, and a scorned former employer all vying for the same bounty, Jack and his new friends will need all their wits and snark to survive until their next meal.