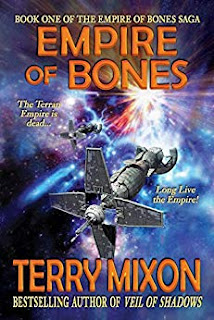 Empire of Bones by Terry Mixon

After a terrible war almost extinguished humanity, the New Terran Empire rises from its own ashes.
Sent on an exploratory mission to the dead worlds of the Old Empire, Commander Jared Mertz sets off into the unknown.
Only the Old Empire isn’t quite dead after all. Evil lurks in the dark.
With everything he holds dear at stake, Jared must fight like never before. Victory means life. Defeat means death. Or worse.