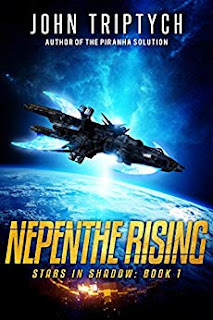 In the far future, two major factions are locked in a galactic cold war. As tensions mount between the technocratic Union and the genome-harnessing Concordance, both sides anxiously watch for a chance to conquer the other.
The Nepenthe is a pirate vessel, loyal to neither. Led by the enigmatic Captain Dangard, her rough and ready crew includes the cat-like alien Commander Creull, Zeno the immortal synthetic, the dashing Garrett Strand, and Duncan Hauk, a promising young recruit.
Hired by a cryptic employer, the crew waylays a transport ship carrying a mysterious passenger. In due time, this incident sparks the beginnings of an interstellar conflict that could threaten the state of known space.
The first of an epic new sci-fi series, Nepenthe Rising delivers what today's fans want: detailed world-building, thrilling action, and mind-blowing adventure on a grand scale.