You don't want to miss this science fiction deal! 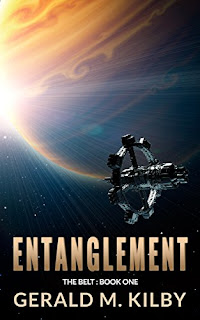 Commander Scott McNabb, of the science vessel Hermes, is three years into a five-year-long survey of the asteroid belt. It’s an excruciatingly dull mission, yet it keeps him far away from the agencies that are chasing him down.
However, his fortunes change, along with the other four crew, when they discover a derelict spaceship in orbit around a binary asteroid. Scott’s share of the salvage would be enough to clear his name and start a new life.
But the ship contains an experimental quantum device, lost while en route to Europa, and ownership of this technology could fundamentally change the balance of power within the solar system. Now that word is out of its discovery, the Hermes finds itself being hunted down by the very people Scott has spent so much time and effort hiding from.
If Scott wants any hope of a new life, then he’s going to have to fight for it. Yet, after a lifetime of running and hiding, he’s not sure if he has what it takes—maybe he really is just one of life's losers. Then again, there is a deep river of rage welling up inside him, born out of a lifetime of countless accumulated injustices, each one inching him ever closer to the edge—and this could be the one that finally makes him snap.