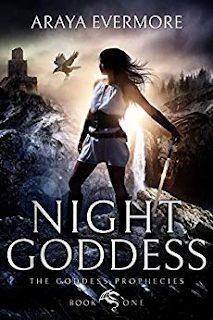 A world plunging into darkness. An exiled Dragon Lord struggling with his destiny. A young woman terrified of an ancient prophecy she has set in motion.
He came through the Dark Rift hunting for those who had escaped his wrath. Unchecked, his evil spread. Now, the world hangs on a knife-edge and all seems destined to fall. But when the dark moon rises a goddess awakens, and nothing can stop the prophecy unfolding.
The Dread Dragons came when the sun set, hunting for the one of prophecy. Her homeland razed and her family murdered, Issa alone escapes the slaughter. Fleeing from the undead hordes of Baelthrom, she is thrown helplessly into the battle for the fate of the world. But when a forgotten goddess speaks to her, she discovers she has magical powers beyond her wildest dreams… or worst nightmares.
Asaph, exiled prince of a lost kingdom and last of the mighty, shapeshifting Dragon Lords, has dreamed of Issa his whole life. Even as he struggles against the dragon awakening within him, he must find the woman who haunts him, or die trying.
The world hangs between the darkness and the light but only the hidden powers of a young woman can save it.
Buy this fantasy book right now!