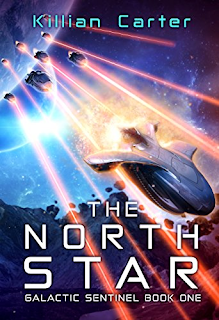 The North Star by Killian Carter

Bringing down his ship was their biggest mistake…

When Jason Grimshaw, First Commander of the Starship Bakura, leads a routine training mission to Colony 115, an unidentified alien vessel forces them to crash-land.
Ensign Clio Evans is separated from her crew in the wreckage. She must re-join them if she stands any hope of surviving, but an alien army stands in her way.
With the invaders hot on their heels, Grimshaw and Evans must find a way off the battle-scarred planet in time to warn the Galactic Council before the mysterious new race tears the Alliance asunder.
Meanwhile, on the other side of the galaxy, Randis Kahn fights for survival on the lower levels of Sentinel Station. Caught between warring gangs and a political conspiracy, he must look to a past he would rather forget or lose everything he holds dear.