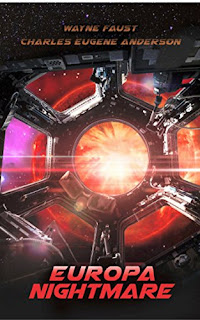 Wayne Faust:  I've always loved Sci-Fi and those are the books I gravitated to growing up. I especially liked the apocalyptic books, where civilization is destroyed (in those days it was usually from nuclear war) and people had to find a way to survive. I always liked to put myself into those stories, wondering how I would handle things differently. To me, if a book didn't have a speculative element, I was rarely interested in reading it.

Chuck: I have been writing Sci-Fi short stories for many years. I have had many of them published and novels seemed like a natural evolution in my writing, but I still like writing short stories the best.

Tell us a little about the Jupiter Saga series.

WF:  I've been in the Edward Bryant writing group in with Charles Anderson for a lot of years. We've critiqued each other's stories over the years. Last year he approached me about doing a book together. I was skeptical because our writing styles are very different, but when he sent me a couple of introductory chapters, I thought, what the hell, this might be fun. It turned out to be a labor of love, since he comes at things from a whole different perspective and the two styles really meshed together.

The first book, "Europa Nightmare," takes place in the future where humans have colonized a lot of the outer planets and some of the moons of Jupiter. A mysterious ship appears from past Saturn and starts a series of events, culminating in a gripping climax, setting up more books in the series.

What makes the book so interesting is the rich bouillabaisse of characters of all different nationalities and personalities. Chuck and I contributed those characters equally and each of them contain personal tidbits from our own life experiences. Whenever I finished a chapter and it was Chuck's turn to contribute the next one, I couldn't wait to see what kind of character he would dream up next.

Chuck: This is a really dark universe in this story. While I haven't included all of the details in 'Europa Nightmare.' The nations of Earth are still fighting wars on our planet and those wars have continued out to space. I have always thought it's similar to the 16th and 17th centuries how the wars of Europe eventually spread to the new world. This time the wars are being fought near Jupiter, and with Wayne's help, I threw some nasty aliens into the mix. It's horrific, scary, and fun.

If you could live the life of one of your characters, would you?
WF:  I'm not sure I would live any of their lives, because some horrific things happen to all of the characters.
If I had to choose one, it would have to be Aaron Ljungman. He was a guy I came up with and he's a lot like me in temperament. In our story, the Swedes have a colony on Europa and basically a monopoly on the docking of ships coming to and from the outer parts of the solar system. I'm Swedish, and we tend to not be too flamboyant, unless we're pushed...

What's your favorite character that you have created and why?

WF:  That would have to be Bodean Crockabilly. He makes an appearance in one of the Molly and Oscar chapters. He's a sort of travelling salesman who has actually come up with a new technology to sell them, which helps them in their quest to find the mystery space freighter. I really hung a left when I put him in the chapter, but I think it worked well.

Do you have any real-life stories that you have incorporated into one of your books?

WF:  All of us use our life experiences in one way or the other in novels and stories. It's rarely a one on one relationship, but you take a favorite phrase from one person know, mix it with a mannerism from another, and throw in an scary event that you have had, and put it all in. It makes your story much more real I think.

Chuck: After I retired a few years ago after being  a public school teacher, I learned how to bake, and I might of put a few cake baking paragraphs into the story. Who doesn't like cake? I also put my experience as an oil painter into the story. Luckily, my co-author Wayne Faust is very patient with me and stories about my hobbies.


If you had to choose a different career other than writing, what would it be?

WF:  I already have my dream career. I've been a full-time music and comedy performer for over 40 years, performing in 40 states and overseas in , , and . I've recorded 15 albums, am on ITunes, etc. etc. Years ago, I had a nightmare and the closing scene was so vivid, I was motivated to write it down. It eventually led to my story "Promised Land," which was published in , and was performed live in . Since then, writing has been one of my main activities when I'm on the road and not on stage.

Chuck: I have been blessed and given the opportunity to do many jobs I have I enjoyed like being a high school basketball coach, a volleyball coach, and a physical education teacher.  I'm going back to college in the fall so I can continue my art studies. Finally, I am a publisher, Mad Cow Press with my senior editor, Jim LeMay. We have published some terrific anthologies last year. I have been privileged to publish Connie Willis, Kevin J Anderson, James Patrick Kelly, Robert J Sawyer, Steve Rasnic Tem, and Wayne Faust. Finally, I help run a writer's group, and I have just been elected president of my retired teacher's association. I am pretty good at keeping myself busy since I since I quit working.

What is your favorite book that you have ever written and why?

WF:  That's a hard question, because I only have three books out there and they are all very different. One is a memoir of performing called "Thirty Years Without A Real Job." The 2nd is a collection of Christian stories called "12 Parables." The 3rd is "Europa Nightmare." I'm just finishing the 3rd book in a dystopian trilogy called "Calek's Tale" that I'm very fond of, so we'll see what happens when that one sees the light of day.

Chuck: It's always the book I'm currently working on. Isn't that way for every author? Recently I finished a story in a new universe, 'Mech Troopers.' It's a fun story, it has giant Mechs fighting in Texas, and it's a story that seems to write itself.


What do you like to do with your time when you're not writing?

WF:  Hockey hockey hockey.  I love to play ice hockey and am on two teams in . I play twice a week from September to April. And I still have all my teeth...

Chuck: I like to train for running races. I'm really really slow, but I have the heart of an Olympic marathoner. Sadly, I'm usually one of the slowest runners. I have also recently started powerlifting. It's fun especially when I get to deadlift.

What's a fun fact that your readers might not know about you?

WF:  I've been married to the same woman for 42 years. We have three kids and eight grandchildren. Just like my kids, my grandkids LOVE to have me make up stories for them. Who knows, maybe a kids' book is in my future.

Chuck: I have completed seven marathons, and I ran the Las Vegas marathon with a broken toe.  I finished the 26.2 miles as the last runner in the race, and I'm sure I cost the casinos on the strip many thousands of dollars. I also have a video clip of me crossing the finish line escorted by twenty Las Vegas motorcycle patrol officers with their sirens blasting. It was embarrassed at the time, but it's a good memory now.

What do you have in store for your readers next?

Chuck: I have been lucky, and have been asked to write for Blaze Ward's Boundary Shock Quarterly magazine. So far I have completed three stories for published, and a few more on the way. I just started writing the next book in the Jupiter Saga, 'Europa War,' and I can't wait to turn it over to Wayne.